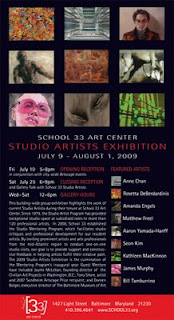 This building-wide group exhibition highlights the work of current Studio Artists during their tenor at School 33 Art Center. Since 1979, the Studio Artist Program has provided exceptional studio space at subsidized rates to more than 120 professional artists. In 2008, School 33 established the Studio Mentoring Program, which facilitates studio critiques and professional development for our resident artists. By inviting prominent artists and arts professionals from the mid-Atlantic region to conduct one-on-one studio visits, our goal is to provide support and constructive feedback in helping artists fulfill their creative path. The 2009 Studio Artists Exhibition is the culmination of the Mentoring Program’s inaugural year. Guest Mentors have included Jayme McLellan, founding director of the Civilian Art Projects in Washington, D.C.; Tony Shore, artist and 2007 Sondheim Artscape Prize recipient; and Doreen Bolger, executive director of The Baltimore Museum of Art. Ms. Bolger has also written a catalogue essay in conjunction with the Studio Artists Exhibition.

School 33 Art Center was established in 1979 as a neighborhood art center for contemporary art in the South Baltimore area of Baltimore City. Formally known as P.S. 33, the architecturally engaging brick and brownstone building built in 1980, was utilized as an elementary school until 1975 when a new facility was built for neighborhood children a few blocks away. The vacant and vandalized building bought action from the South Baltimore Community Committee which requested that Mayor William Donald Schaefer revitalize this unused facility. Based on the success of Long Island City’s P.S. 1 in New York and the strong national presence of alternative space programs in the late seventies, Mayor Schaefer proposed a similar program for Baltimore, thus creating School 33 Art Center.

As this building represented a significant component of Baltimore’s architectural heritage, its renovation exemplified the City’s belief in the revitalization of unused urban resources. The renovations were made possible with federal funds from the United States Department of Commerce, Economic Development Administration and through the City’s Public Works Improvement Program.

After an extensive two-year restoration to allow for the creation of adequate gallery, studio and classroom space, School 33 opened its doors in July 1979, becoming Baltimore’s original alternative space for contemporary art. Its program offerings included one gallery exhibition space, studio facilities for professional artists, and classrooms for ceramics and printmaking workshops.

Since that time, in addition its studio program and services for artists, School 33 has expanded its exhibition, educational and special events programming. Highlights over the past 21 years include eighteen annual exhibitions in three gallery spaces; an extensive outreach program to South Baltimore neighborhood city schools; and the creation of the annual Open Studio Tour. These augmented programs were developed as a direct response to needs expressed by the public and art community.
Posted by Denée Barr Art News and More at 2:41 PM No comments: 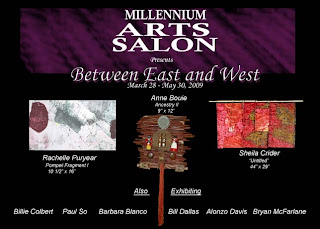 Bearing the name of its 2008-2009 theme, Between East and West, Millennium Arts Salon presents a group exhibition featuring artists living and/or working in the US and abroad - in Europe and Asia, opening Saturday, March 28, 2009.

Curated by Barbara Blanco, assisted by Janell Blackmon and L'Rai Arthur-Mensah, works in the exhibition hint of artists' influences beyond the East and West borders of the US -- for example, Ann Bouie and African beads; Alonzo Davis and Sheila Crider who both did residencies in China and Japan respectively, Paul So's native Honk Kong and urban U.S. experiences, Jamaican-born Bryan McFarlane, living in Boston with a studio in Beijing, Washington DC-born Rachelle Puryear and the natural terrain of Sweden, to give a few examples. Between East and West in some ways parallels The Third Mind: American Artists Contemplate Asia, 1860-1989, exhibited at the Guggenheim Museum in New York City, which highlights American Artists and Asian influences. But it by no means stops there, as Billy Colbert's figurative depiction of urban life in Washington and Baltimore and Bill Dallas's colorful and complex abstractions attest.

Please join us for the closing reception, Friday, July 17, 2009, 6-8 pm. There will be screenings and photograph presentations of MAS 2008-9 programs on the 2nd floor media room."

The exhibition frames the MAS 2008-2009 program season Between East and West, referring not only to the east and west borders of the continental US, but extending further east and west to Europe and Asia. This event is FREE and open to the public.

* Sunday, April 5, 3-5 pm -- East and West Views: A Conversation between Rachelle Puryear and Billie Colbert. Artists talked about their participation in the MAS-Pyramid Atlantic 2nd print collaborative, the makings of their print, and the environments -- Stockholm, Baltimore, and Washington, DC that have shaped them.

§ Sunday, April 26, 4-6 pm - A Look at Two Presidents: Lincoln and Obama -- a Conversation with Ronald Walters, PhD and Les Payne, Editor Newsday, moderated by Mel Hardy, MAS. This was a joint project between MAS and the Brady Gallery at George Washington University*, in celebration of the Lincoln Bicentennial and our new President. This event was held in the Jack Morton Auditorium at GWU, 4-5:30pm.

* Saturday, May 9, 3-5 pm -- A Creative Exchange between Artists Ann Bouie and Barbara Blanco. Their artistic expressions are as different as "east and west" -- one artist's approach is punctuated by beadwork; the other, by photography and canvas. Both approaches, stunning. The artists discussed influences that inform their work.

§ Thursday, May 21, 6-8 pm -- A Conversation with Dr. Richard A. Long at MAS, 6-8 pm. MAS was honored once again to host Dr. Long. Dr. Long discussed the next issue of International Review of African American Art, which was devoted substantially to the presence of Richard A. Long in the visual arts.

* Saturday, May 30, 6-8 pm at the Hamiltonian Gallery* -- Western Artists and the Contemporary Asian Art Scene. A panel discussion with artists who share the commonality of living and/or working in Asia, with Sheila Crider, Paul So, and Bryan McFarlane. This was a joint project between MAS and the Hamiltonian Gallery.

*Note: All programs at MAS unless otherwise stated.
Posted by Denée Barr Art News and More at 4:02 PM No comments: