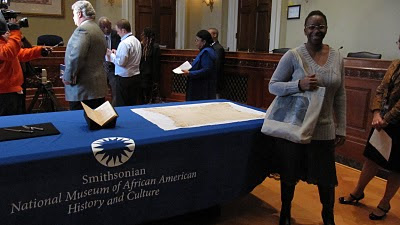 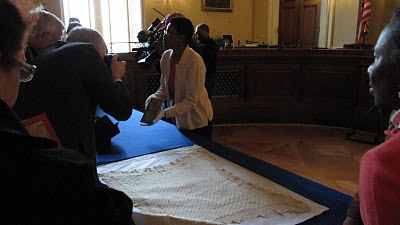 
Denee Barr Photographic on Wednesday, March 10, 2010 in Washington, DC where historian Charles L. Blockson donated about 40 objects from Harriett Tubman's life to the Smithsonian's National Museum of African American History and Culture. The museum is slated to open near the Washington Monument in 2015. Blockson, 76, is a prominent collector of black history. The Charles L. Blockson Afro-American Collection at Temple University in Philadelphia started with a donation of 20,000 items in 1984 and has grown to more than 200,000 items including slave narratives, art and rare texts.

Harriet Tubman's favorite hymnal from 1876 and a silk shawl given to Ms. Tubman by Queen Victoria of England are among some of the artifacts donated by Charles L. Blockson to the Smithsonian National Museum of African American History and Culture.

Posted by Denée Barr Art News and More at 6:40 AM No comments: