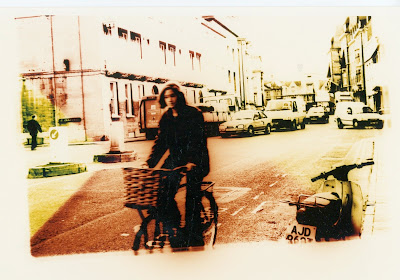 Bikes and Art at Howard Community College
The Bike Project: A Visual, Literary and Cinematic Celebration of Biking in Our World, October 8-November 15. Reception October 24, 5-7pm.

(Columbia, MD) – Howard Community College features “The Bike Project: A Visual, Literary and Cinematic Celebration of Biking in Our World.” The project includes multimedia exhibitions and a film festival. A reception to will be held on October 24, 5-7pm at The Rouse Company Foundation Gallery in the Horowitz Center for Visual and Performing Arts. The exhibition, reception, and film festival are free and open to the public.

The Bike Project: A Literary Exploration explores biking through writing. Bikers often share the joys and challenges that they experience from the physical, social and emotional aspects of biking through writing in blogs and online forums. Based on the NPR writing project titled, “This I Believe...”, bikers were asked to respond, in writing, to the theme, “I bike because…” Over 50 riders, most of those whom are not writers, responded.

The Bike Project: An Exhibition is invitational exhibition held in The Rouse Company Foundation Gallery. While the literary component of The Bike Project focused on bikers, who are not necessarily artists or writers, the exhibition does the opposite. Established artists—painters, sculptors, photographers, potters, printmakers, etc—who are not necessarily avid cyclists(though some are), were asked to create bike related artwork.

The Bike Project: Did You Get That??? Great Moments On(and Off) the Bike, Photos by Bikers is an open exhibition where bikers were asked to submit photos of their choosing that depict their biking experiences. It will be shown in the Art Department Gallery October 8 – November 15, 2009.

The Bike Project – A Film Festival, runs October 19-23, in the Monteabaro Hall of the Horowitz Center for Visual and Performing Arts. Monday, October 19, 7pm, features two films: “Off Road to Athens” captures the personal struggles and sacrifices of 8 cyclists trying to make the U.S. Olympic team, and “24 Solo” follows Howard County resident and 24 Hour Solo World Champion Chris Eatough on his quest to a 7th title.

Wednesday, October 21, 7pm, features three films-“The Collective,” “Roam,” and “Seasons”- that portray the newest and cutting edge images of the freeride progression, and follows seven of the world’s best mountain bikers through the course of 4 seasons of one year.

Thursday, October 22, 7pm, features Adventures For the Cure: The Doc" which chronicles the incredible, 6,500 mile trek made by 3 young men across the United States on single-speed, fixed gear bicycles in order to raise money and awareness for diabetes, and to help disabled children in Kenya. The film is narrated by Greg LeMond.

Friday, October 23, 7pm, features “Klunkerz,” a thoughtful and accurate portrayal of the cycling enthusiasts of Northern California’s Marin County where mountain biking originated among a diverse group of cyclist racers and fun-loving hippies looking for a way to commune with nature.

The Bike Project:
A Visual, Literacy and Cinematic Celebration
of Biking in Our World

Email ThisBlogThis!Share to TwitterShare to FacebookShare to Pinterest
Labels: Literary and Cinematic Celebration of Biking in Our World, The Bike Project : A Visual
Newer Posts Older Posts Home
Subscribe to: Posts (Atom)