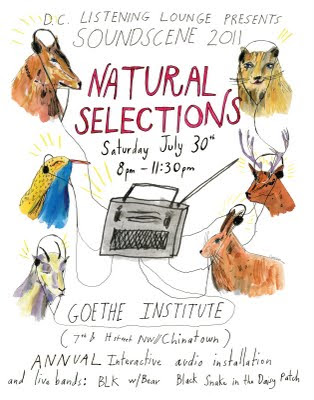 
"Notorious Radio Surfer" aka Denee Barr shows her natural inclination for selectively scanning the radio dial while in the car back dropped against a video and a recorded music session/interview about the relevance of radio with musician friends Robert O'Brien and Charles Crawford.

The DC Listening Lounge has explored sound and storytelling for more than five years in Washington, DC . Its members meet monthly in a rather informal setting: someone's living room. With a plate of food in hand and a beverage, they sit and listen to each other's work. Sometimes the pieces are highly produced, others are works in progress. The Lounge encourages experimentation and motivates audio enthusiasts to become producers.

Washington, DC Native Denee Barr is an artistic chameleon skilled in multi-media art, photography, video, music, and singing. Denee has won numerous awards for her visionary artwork and performance talents, awarded a 2003 Maryland State Art Council Individual Artist Award Grant for Artist Excellence in Photography, and Denee is the First Place Winner of the International Vocal Solo Competition at Howard University 1979. Denee studied engineering, radio, television, film, and video at the University of Maryland College Park and she is known for her multilayered portfolios and diverse perspective.


John Asante is a radio producer in D.C. on Talk of the Nation, NPR's live, call-in talk show. When he's not booking guests, writing scripts, and screening calls like a mad man, he enjoys playing soccer and softball, making mixtapes, and wearing all things plaid or gingham. He comes to D.C. by way of Atlanta (and New Jersey, although he won't readily admit it).


I play both acoustic and electric violin in various genres -- classical, jazz, ambient, new age etc. I completed my Master Degree in Violin Performance at the University of Maryland on a fellowship studying with the Guarneri String Quartet. I completed my undergraduate work in violin performance at the Peabody Institute. I have played with the Borghese String Quartet, the Columbia Orchestra, the Annapolis Symphony and the Fairfax Symphony. I also have performed at numerous special events playing either the electric violin or the acoustic violin.


Jazz guitarist Jerry Gordon is Baltimore/Washington, DC area treasure. His bashful demeanor is eclipsed by his overwhelming talent and his style is clearly that of Wes Montgomery or George Benson, but give Jerry a closer listen and you will hear an elegance that can only be developed over many decades of honing. Jerry Gordon jazz is classy and superb.

Charles Crawford is a multi-talented performer who plays the guitar, saxophone, bass, violin, and more. A visionary musician, Charles is a genius at improvisation with an intuitive sense of creativity. Based in Washington, DC Charles Crawford has played with many jazz greats, Marsalis and Najee to name just a few.
Posted by Denée Barr Art News and More at 2:17 PM No comments: