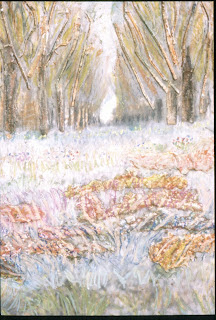 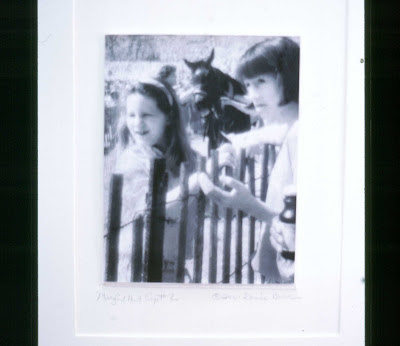 Maryland Hunt Cup #2 Glyndon, Maryland c Denee Barr 2001 All Rights Reserved
Good Evening,
I like this multi-layered photo and it took a lot of skill to capture the images in this silver gelatin print and "herculean" efforts to assemble the work in my darkroom. Earlier this morning, I published this image smaller but tonight I've decided to show the work larger so that you can see the winning horse better and see Cousin Barbara's hand in the far right corner holding a bottle of either fruit juice or iced tea.
Enjoy! Denee
Posted by Denée Barr Art News and More at 7:04 PM No comments: 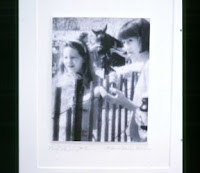 
Boo! I missed the Maryland Hunt Cup this year again. The Maryland Hunt Cup first debuted in 1894 when two rival fox hunts decided to see who had the best horses. This year the race was run on Saturday, April 28th. The Maryland Hunt Cup is the #1 steeplechase race in the U.S. I know that every spring in April is Maryland Hunt Cup time. I started attending this event with camera in tow in the late 1980's early 1990's. I loved seeing the horses jump over timber logs backdropped against the rolling green hills of Baltimore County. Some years I would go alone and other years I would be accompanied by my mother, my neighbor's kids and/or my cousin Barbara (30 years my senior). Cousin Barbara was familiar with horse racing and one year we decided to place a bet on one of the horses. We both decided that one horse looked especially chipper and ebullient so we place a very modest bet.....Cousin Barbara showed me how. We both wished that we had put more money down because the horse that we chose ended up winning 1st.....see photo above....that's the horse that won with a woman as jockey too! I captured this image back in the early 1990's. This silver gelatin print was printed (2001) the old fashioned way (Photoshop wasn't even a whisper back then) by sandwiching 3 negatives and praying that by working multiple exposures in the darkroom that I would get the right amount of imagery to come through on my photo fiber paper.

Mr. Adams, can you remember the first photograph that you ever took?

"Well, that would be hard because the family had an old 3 1/2 by 3 1/2 Kodak Bullseye and we'd just take pictures. I think the first photograph I was conscious of really trying to make was a picture taken whilst I was sitting on a rotten stump near Camp Curry. The stump gave way and I descended, I clicked the shutter and in some miraculous way I got the picture. When the film was developed at the local photofinishers, he said: "You must have held the camera upside down when you did this one." I was wracking my brains to figure out how I did do it. He showed me the whole roll and I thought that it must have happened when I fell off the stump. That was in the Yosemite Mountains during 1916 and as I became more interested in the mountains, my natural impulse was to have a visual diary. The excitement of Yosemite became strong and filtered through me into some aesthetic experiences which probably were supported by similar experiences I was having in music study......"

Was there any art background in your family at all?

Why did you study music instead of photography?

"I studied music when I was about eight or nine. I forget the exact date, but I was very young. So I'd worked with music years before I even thought of using the camera."

So in fact, you ended up being a self-taught photographer?

"That's all you could be then as there was no school. I learned some sort of bread-and-butter things. In the summer of 1917 I learned a lot about developing, picture washing, the 'nuts and bolts' as we call it."

You got involved at a fairly young age with the conservation movement?

"Oh, yes, there was a club founded in 1896, but I didn't really have any direct interest in that until I got to Yosemite. In 1917 I joined the Sierra Club and in 1918 and 1919 I was custodian of the club memorial. Conservation was growing all the time because then we used the word conservation with a specific meaning. I don't use it at all now because it has lost its original meaning. You can conserve everything from beans to oil you know. I use the term environment. That really is more to the point." 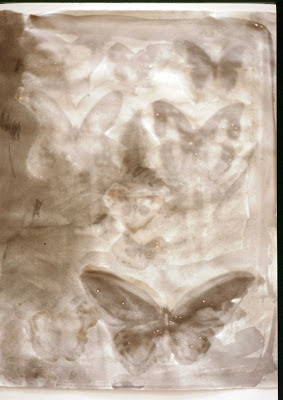 Medium: photo emulsion and mixed media on Arches paper
Posted by Denée Barr Art News and More at 9:36 AM No comments: 
I captured (1992) this image in England on a trek through the gentle rolling hills of Oxfordshire and the Cotswolds. Speaking of rolling hills, wellies, and sheep merchants today is the last day for the Maryland Sheep & Wool Festival (May 5 & 6 2007) www.sheepandwool.org at the Howard County Fairgrounds in West Friendship, Maryland. The festival started 34 years ago and has a loyal group of devotees here in Howard County and beyond. Some of the samplings on today's program are "Spin with the Weavers Guild of Greater Baltimore" (11:00am-2:00pm)........try your hand at the magical art of handspinning fleece into beautiful, useable yarn; "Color On Fiber with Judith Mackenzie McCuin" (12noon-1:00pm)....learn how to use dyes to color protein fibers, yarns and finished pieces. The talk will cover how color is created by dyes, the characteristics of different types of dyes and how to choose the dyes that will work best for you; "Parade of Sheep Breeds" (12:30pm); Live entertainment starts at 10:00am and ends at 4:30pm with the Family Hoedown and the Sunnyland Band (Slim Harrison)..........Food, Festival, Music, Demos, Merchants, Spinning, Weaving, Shearing, Family/Kids Events.............Free Admission

Denee
Posted by Denée Barr Art News and More at 7:18 AM No comments: